The first major of 2021 was a great success at Augusta National a month ago. Seeing patrons on the grounds, roaring for eagles and groaning for bogeys, reminded us what we have to look forward to as restrictions from COVID-19 ease and we attempt to return to a state of normal.

Next week’s second major, the PGA Championship, will no doubt provide drama we would expect around the famous venue hosting the 103rd edition. Kiawah Island and its Ocean Course are no stranger to major golf tournaments, hosting a considerable number of championships throughout its history, dating back to the 1991 Ryder Cup dubbed ‘The War on the Shore’. An event full of drama and excitement spanning three days came down to the final putt, a three-footer missed by Bernhard Langer, handing the trophy to the Americans. Since then, the course has hosted two World Cups (1997, 2003), the 2005 PGA Professional Championship, the 2007 Senior PGA Championship and of course Rory McIlroy’s triumphant eight shot waltz in the 2012 PGA Championship.

The Ocean Course opened in 1976 and is considered a signature of the late Pete Dye. Originally designed to sit behind the sand dunes along the shoreline, Dye’s wife and design partner Alice suggested raising the property to optimize views of the seaside. In doing so they produced a course which not only boasts more seaside views than any other course in the northern hemisphere but is affected by the wind equally in comparison to the links courses of the United Kingdom. One of the longest major championship venues in the world, the Ocean Course tips out at 7,876 yards with a par of 72. The weather forecast is impeccable, winds expected to blow steadily between 10-15mph all four days and temperatures ranging between 68-81 degrees start to finish. Factoring these elements, playing conditions should be firm and fast from the tee as well as around the greens. The sheer length of the Ocean Course will always favor the longer hitters but a premium on pace control with putts will no doubt be a factor. Putting surfaces at Kiawah’s Ocean Course average around 6,000 square feet, providing a lot of long sweeping putts when the ball is not hit in the correct location. There is no doubt it is going to take a very well-rounded game to win at Kiawah and there is a host of players with a chance to hoist the Wanamaker Cup.

It seems every week, any player in the field could come out victorious, however generally speaking many of the same names float closely to the lead week in and week out. Players like Justin Thomas, Jordan Spieth, Jon Rahm, Bryson DeChambeau, Brooks Koepka, and Xander Schauffele will feature at the top of many betting brackets. Despite an injury cloud for world number 1 Dustin Johnson who withdrew earlier this week from the AT&T Byron Nelson in Texas, it is very likely he’ll feature come Sunday if the withdrawal was precautionary. A couple others we think are worthy of keeping an eye out for are Matt Wallace from England who has been in form and close to the lead a number of times this season. He is yet to close out over the weekend, yet it seems like he will in the near future. Recent winners in New Orleans, Aussie duo Marc Leishman and Cameron Smith seem poised to win or once again contend in a major. Leishman has a fantastic long iron and Cameron Smith’s impeccable short game will no doubt make them dangerous challengers throughout the week.

Our focus surrounds the form, recent results, and wins from the past for Rory McIlory, Hidecki Matsuyama, and Colin Morikawa. McIlroy put himself back on top of the Vegas odds after his 19-month victory drought ended last week in Charlotte at the Wells Fargo Championship. He is one of the longest, straightest drivers the game has ever seen but what is most impressive is his 52/52 putts made from six feet and in around Quail Hollow last week. The combination of a relieving win, good putting, undoubtedly good driving and the memories of an eight-shot victory back in 2012 makes McIlroy arguably the most dangerous player to watch heading into Kiawah next week.

Matsuyama is fresh off his victory at Augusta National a month ago where he became the first male Japanese golfer to win a major championship. It has been a whirlwind since, traveling immediately back to his homeland of Japan where media commitments were no doubt the primary premise for the trip. The highlight of his return home came at the end of April, receiving one of the highest civilian honors in Japan, the Prime Minister’s Award. Shortly thereafter returning to the United States to tee it up this week at the AT&T Byron Nelson Championship in Dallas, Texas. It will be his only start since winning The Masters so it will be interesting to see how he performs, picking up where he left off or knocking off the rust?

Last on our list is Colin Morikawa, the reigning PGA champion. Morikawa’s preference down the stretch at TPC Harding Park in 2020 was impressive. Many of the biggest names and hottest players in the game were breathing down his neck. Morikawa remained poised throughout, stamping his claim on the title at 16 during the final round where he hit a driver to 7 feet and calmly rolled in his eagle putt, all but assuring a victory. The length Kiawah Island presents bodes well for Morikawa’s spectacular iron game, arguably the best in the game. His only start since The Masters last month came in Hilton Head at the RBC Heritage where he finished in 7th.

This year’s edition of the PGA Championship will no doubt be a remarkable one thanks to the venue it is being played on. The 233-yard par 3 17th will undoubtedly provide a spectacle in potentially deciding the champion. These events are enjoyed best from the couch with a beer in hand! 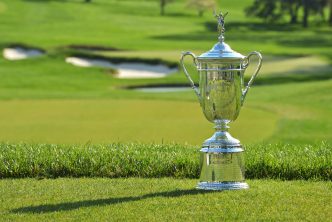 Written by Brad Smith
US Open Preview: The ‘Outsiders’
The Masters: History in the making