Coore & Crenshaw might be the most accomplished golf course design duo in the world. This duo has decades of experience in course builds, renovation and restoration. Often on projects within the world’s top 100 courses.

Bill Coore was born in Anderson, North Carolina a year after World War II, 1946. A fine golfer himself, Coore played for Wake Forest University in the mid 60’s. Wake Forest has produced some fine golfers. Alumni include the late Arnold Palmer and current world top 10 player Webb Simpson. Coore graduated from Wake Forest in 1968 and landed his first job in the golf design business with Pete Dye’s firm in 1972. Following 10 years’ experience under the guidance of Dye, Coore ventured out to form his own company in 1982.

Ben Crenshaw was a known name well before he ventured into the world of golf course design. Born in Austin, Texas in 1952, Crenshaw was a standout player at every level he competed. Attending the University of Texas in the early 70’s he was the Haskins Award winner from 1971-1973. Only the top collegiate player in the United States can receive this honor. After graduating college, he quickly found his feet on the PGA Tour, winning a total of 19 times including two majors, both at The Masters in 1984 and 1995. His fascination with golf course design began with a visit as a sixteen-year-old teenager to The Country Club of Brookline in New York. He would begin to focus his attention on golf course design at the turn of the millennium as he began reducing his competitive tournament play.

The team of Coore and Crenshaw was a match made in heaven from the start. Both share many similarities in their philosophies on design. This philosophy is uniquely their own but draws on a combination of elements provided by the all-time greats. People like Donald Ross, Alister MacKenzie, C.B. MacDonald, Perry Maxwell, and A.W. Tillinghast served as inspiration. Simply stated on their website,

“Traditional, strategic golf is the most rewarding, and the creation of courses that present this concept with the greatest artistry is the ultimate goal”

Many of the Coore and Crenshaw designs share a rugged familiarity. For instance, the shaping used to define the bunker style and longer fescue grasses used to highlight them. No one can match their ability to use the land set forth by nature to create hazards. Nor, their ability to move land in a way to give the impression it already existed. They are meticulous in their decisions to undertake a project for this very reason. A best example being, initial surveys of the land for the Club at Clear Creek in Tahoe. Bill Coore made his initial reservations known about the property, particularly concerned about the steep terrain and the need for excessive earthworks to carve out a golf course. In all, Coore required three, 5-day site visits of the property before he felt comfortable with a routing which suited their design philosophies while minimally impacting the surrounding landscape.

Bill Coore spends the majority of his time working from his home in Scottsdale, Arizona where he lives with his wife Sue, while Crenshaw still resides in Austin, Texas with his wife Julie and their three daughters. 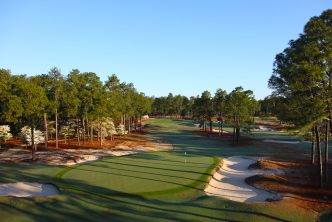