Learning to read the green like a pro can be a difficult task for amateur golfers. Simplify your putts with these tips and tricks!

See the line OR putt to a point

We all see the line differently when surveying a putt. Personally, I see the curve: the line the ball will travel on as it starts out and moving with the lie of the land as it makes its way to the cup. Others will see the break as a whole and will pick the final point to putt to nearer the hole, encompassing the whole break. Choose what’s right for you and make that part of your routine.

Survey the green on the approach

A tip I picked up from Brad Faxon, one of the best putters of all time, is to read the green as you approach the surface. Surveying the green from a distance gives you a better perspective of the overall undulations of the putting surface. This perspective will give you a better understanding of the general break your ball will take. A final inspection of the line close to the hole and ball should confirm this.

Read the putt from behind the hole, not the ball

When the cups are cut early in the morning, the hole won’t give much indication to the grain. Pay attention to the light and dark shades of green you are seeing on the green. The dark shades indicate the grain is going toward you, the lighter shades of green indicate the grain is running away from you. Later in the day, as the sun moves across the sky, it tends to pull the grass toward it. One side of the cup will gradually appear worn down. This indicates the grass is growing away from the worn side of the cup. Grain is important on Bermuda grass because it can have a drastic effect on the break of a putt. For example, a putt with a gentle right to left break but opposing grain may end up rolling fairly straight.

This method of reading putts was particularly popular in the Nicklaus era and prior. It’s not used as much anymore, but it can be a simple and effective way to read the line for golfers who may struggle to otherwise. Especially on subtle breaking putts from inside of 15 feet. Stand back from the ball in line with the hole, maybe 6-8 feet or so. Feet shoulder width apart. Hold the putter lightly with the thumb, index, and middle finger of your hand. Raise the putter up, closing your non-dominant eye, and line the shaft up with the hole. You will notice the putter head is leaning slightly to one side of the golf ball, indicating the way the putt should break. The more the putter leans to one side, the more it will break.

Still needing a little extra help on your putting? Try taking it back to the basics of improving your putting stroke! 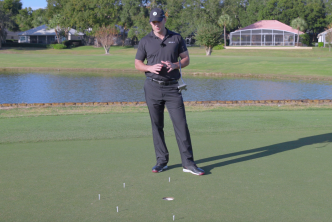 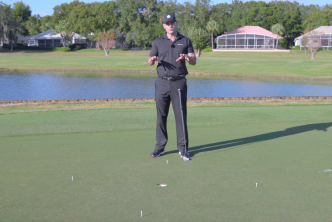 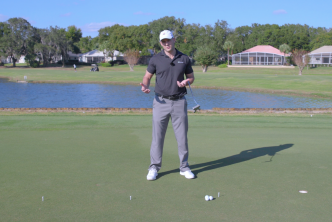 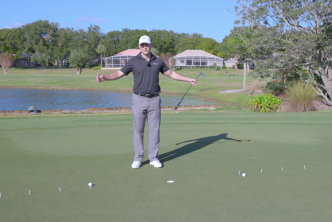